I moved into the new temporary studio this week.  It’s not a bad space.  I’ll spare the long, drawn out details (blah blah blah).  I am moved in and shooting.  Not much more to say about that.  I’m sort of tired of listening to myself go on and on about it.

Lately, I’ve been thinking a lot about my switch from shooting film to shooting digital.  I made the move to digital a few years ago, primarily for the apparent convenience of shooting on digital.  Prior to this, I shot primarily on 35mm or 4x5 medium format, mostly black and white.  I hand printed all of my prints, which usually resulted in long, dizzying hours in the darkroom, particularly if I had a shoot that consisted of a lot of images. 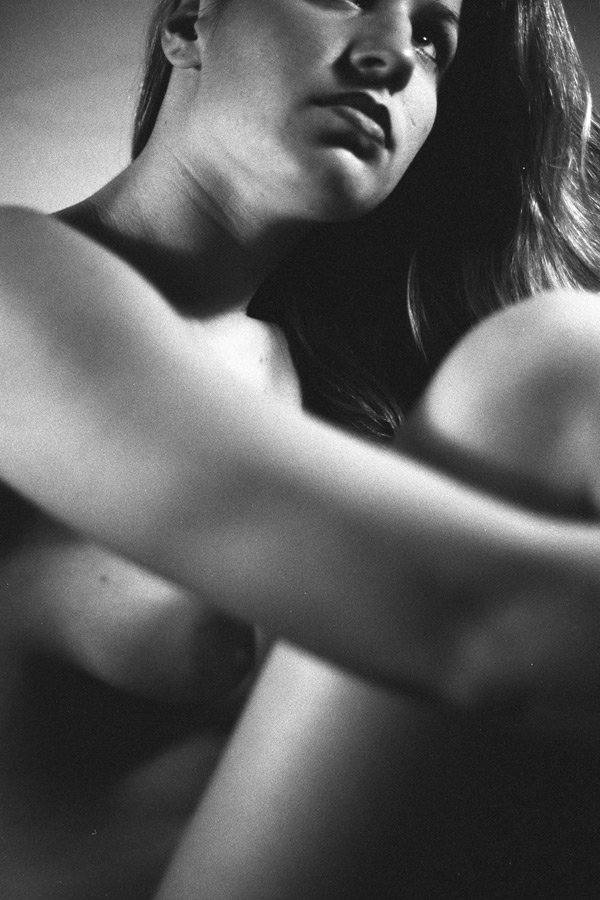 Shortly after moving to digital, I also moved to a new house, and decided not to rebuild my darkroom.  As a result, much of the work that I did prior to shooting digital has never been printed, or might exist online in the form of low resolution scans.

(Left: one of my favorite images from the series of Janice shoots, circa 1999.  This was shot on the thick and sexy high-grain Fuji Neopan 1600)

The Book of Ruins project was a three year project, which usually consisted of at least one shoot per week, though averaged probably as many as three days per week.  I literally have thousands of images from this project, and there are many, many images where I had merely developed the film, then filed it away for a later date when I had time to process prints.  As a result of my move, I never printed many of those images.

Beyond that, I think there’s an underlying psychological difference between shooting film and digital.  Call me crazy, but with film, there was always that minute chance that something unexpected might happen, and as a result, handling the film and processing was an intensely fragile process.  And of course, there is the anticipation of waiting to see that one shot that you know you nailed, and hoping that, somewhere in between that split second when you  ‘see’ the shot and then push the shutter release, you didn’t botch the focus or exposure, etc.  I think there’s something a bit exciting about that unknown.

Digital removes a lot of these concerns, as you can preview your work – that is, if you’re into the whole chimping thing (which I think removes some of the instinctive processes while shooting, unfortunately).  There is less chance of losing a shot due to some technical failure (though I did have my first CF card fail on me last week).  You are afforded the same tools digitally that you’d have in the darkroom.  Despite these advantages, you have the ever-present nightmare of color management, prints that might fade a few years ahead of their estimated lifespan (unless you’ve got a good printer or print service), among other random pitfalls.

To get down to it (finally), I feel there is a divide between my film work and my digital work.  Much of what is represented on my websites is from the “digital era”, with a few scans here and there from various prints I did along the way.

For whatever reason, this has been on my mind a lot this week.  So I went out and bought a higher end film scanner to start scanning in much of my older work, perhaps to try to capture the missing pieces from in between now and then.   Sort of like visiting an old friend that you haven’t seen in years.  There might be a few surprises stored away in the pages of the archives…

So, hopefully I will have a few of these online next week.  It should be exciting…