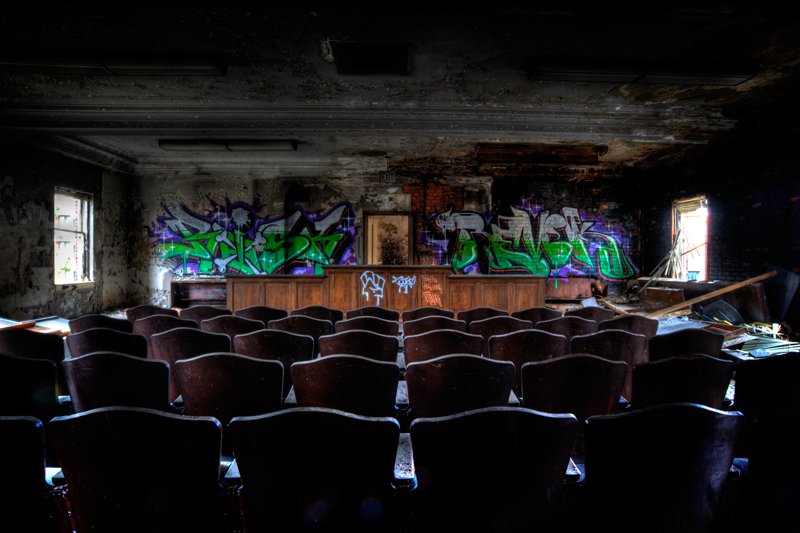 I had the chance to spend three days shooting in Detroit this week.  Like last year, we focused on some of the historic buildings and ruins in the area.

This year, the weather was much more favorable, and we went in with a specific plan for shooting.  We ended up only missing three locations - one, because the location had just been demolished, and the others, mainly due to dangerous conditions at the sites.

There is definitely an apocalyptic feel to some of these structures.  Papers and notes still sit on desks.  In the police precinct, filing cabinets still contain records of tickets and evidence envelopes.  In the classrooms of Northville, graded papers litter the floor and food trays remain, as if everyone had left at once.  Patient records, vials of medication and equipment still sit in the examination rooms, virtually untouched.   It instantly reminded me of the footage of the post-disaster Chernobyl sites.

The architecture of many of these buildings is something I am always drawn to.  You rarely see modern buildings constructed with this level of detail and workmanship.  Yet, these buildings are left abandoned, essentially left to stand until they fall on their own.  It is very likely that at least two of these structures will not be around when we visit again.

My favorite location in this series was the cathedral, which stands empty and open to the elements, scrappers, and anyone else who happens to wander in.  It reminded me of the granduer of Michigan Central Station, which is a structure that can not be fully appreciated until you are standing within its grand halls.  Both of these locations present a vast potential for other projects.

In locations where the architecture wasn't as grand, I tried to focus on elements that might tell a further story of the site's history, or perhaps in some cases, present some irony.  The nursery, for example.   Or the bible on the steps at Calvary Presbyterian - open to John 20, which discusses the resurrection.

Given that these locations were quite a bit more dangerous and likely inhabited, we went in very light weight in terms of equipment.  Everything is shot by nautral light, using only the equipment that I could stash in my coat (I do have big pockets).

From a technical standpoint, I strayed from using the HDR processes that I used in the previous series of shoots from Detroit.  I've really become turned off by the over use of HDR processing, and the cartoony effects that everyone seems to be using along with it.  While it was dramatically different and impressive initially, I think if you are attempting to produce your own personal artistic style, you're likely to blend in with everyone else if everyone is relying on the exact same software processes to produce their final images.

That said, I did use some degree of merged exposures, though minimizing the level of over processing seen with many hdr images, as I wanted to keep the environment and images as natural as possible.  The lighting in some of these locations can be difficult, and using a range of exposures does help to better represent the highs and lows, over what a single image might product.  As someone who grew up laboring in the dark room, I always gravitate toward the traditional techniques for image manipulation to create drama in the image.

In any event, I have many unedited images from both trips, and I'll be going through these over the next few weeks.  I'll likely re-edit some of the old images as well.

As a final thought... this series of shoots revolved around sites outside of the center of the city, and took us to areas that I hadn't been before.  The state of the city isn't something that can be captured very well in images, and this series only tells a small story.  Blocks upon blocks of empty, burned out, or simply abandoned houses stand wide open to the elements.  Rows and rows of empty businesses, warehouses, factories and apartment complexes litter the span of city.  Yet, there are positive efforts in motion, and hopefully we can focus on some of those as well during future trips to the city.

Lastly - A huge thanks to my good friend Jason who helped with a lot of the research for both of these trips, managed the GPS, and helped to scope out the locations we went to (as well as carrying my tripod occassionally).  These trips are definitely a team effort.