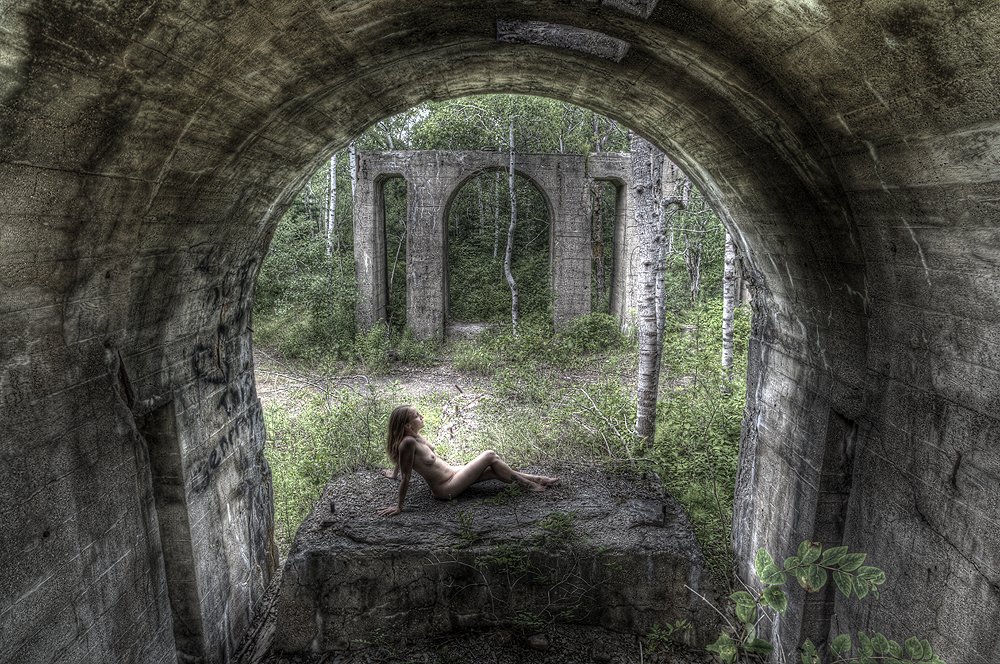 "A flourishing civilization falters in the wake of an economic disaster. Residents abandon their homes and shops, seeking life elsewhere. Over time, a dense forest consumes the ruins of the city, making its presence all but a memory."

This new series of work is from a shoot that took place this week at the site of a once large town which was abandoned in early 1900.  In its day, the town was considered a model town, featuring a theater, hotel, and a promising large industrial center.  Parts of the town were ornately styled, with accents of roman influenced architecture.  The town was eventually abandoned after a few years, as it failed to meet its economic expectations.  It now stands well hidden in a dense forest of trees and brush.

The majority of my outdoor figure work to date has been black and white.  For this series, I elected to go with a touch of muted color, as I thought it would really bring out some of the interesting facets of the stone work in some of the structures.

Having visited this site almost ten years prior, it was interesting to go back and explore again.  This was perhaps one of the more physically challenging shoots I've done recently, primarily due to the extreme heat, dense brush, and the dangerous elements of the remaining structures and underground tunnels.  Given this site lies on almost 80 acres, I'm certain there is much more to see and explore.  This is just a taste of what we saw.

I should also add a HUGE thanks to my model who put up with a lot during this shoot - horrible bugs, heat, and the demands of the shoot itself.  We both walked away a little scraped up, bruised and exhausted, but it was worth it in the end.